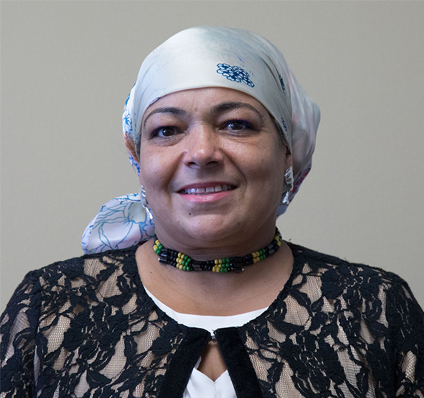 Jeannette Bocanegra is Community Connections for Youth’s (CCFY) Director of Family Engagement. She joined CCFY in 2010 as the lead researcher for a Participatory Action Research project that mobilized the family members of incarcerated youth to collect data on parent experiences with the juvenile justice system. Since joining CCFY, she has developed the organization’s Family Strengthening portfolio, and also initiated the groundbreaking Parent Support Program (PSP) in partnership with the NYC Department of Probation. She serves as an advisory board member for several juvenile justice initiatives in New York City as a voice for families.

Jeannette has served as a speaker and consultant for several high profile juvenile justice initiatives, including the Annie E. Casey Juvenile Detention Alternatives Initiative (JDAI). In 2015, Jeannette was awarded the Child Welfare Organizing Project’s Courageous Activist Award, and later that year received the “Lo Mejor de Nuestro Comunidad” award from Comité Noviembre. Prior to joining CCFY, Jeannette was an active educational activist and parent organizer who worked to mobilize parents for more than twenty years. Jeannette noticed early on the deterioration of schools in the community as well as the lack of parental involvement in shaping policy and practice. Jeannette was involved in parent advocacy and educational reform through her roles as a public-school volunteer, PTA President, and Vice President and Secretary to Community School District 10 Presidents Council. She worked as a full-time Parent Involvement Coordinator at ASPIRA, providing professional development for parents across the city.

Jeannette took on the role in advocating for families with youth in the juvenile justice system based on her own difficult experiences as the parent of an incarcerated youth. She strives to ensure that young people who have come into contact with the juvenile justice system are given a second chance to become productive members of their communities, and to provide families with the tools and resources to help their children succeed.