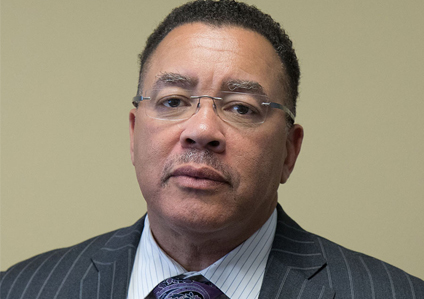 Kevin J. Bethel is a retired Deputy Police Commissioner in the Philadelphia Police Department, the 4th largest police department in the nation with over 6,600 sworn personnel. Prior to his retirement in January 2016, Bethel commanded Patrol Operation’s for the entire city. This appointment included oversight of the 21 Patrol Districts, Neighborhood Services Unit, Philadelphia School District Police and Community Relations Unit. Previous assignments throughout his 29 years of service with the Philadelphia Police Department include, positions within the Special Investigative Bureau, Narcotics Strike Force, Narcotics Field Unit, Narcotics Intelligence Investigative Unit and the Internal Affairs Division as well as Commanding Officer of the 17th Police District.

Among his many responsibilities, Kevin has done extensive work in the Juvenile Justice Field; most recently developed a School Diversion Program within the Philadelphia School System. The program diverts first time, low‐level juvenile offenders by utilizing programs within the Department of Human Services. In its first year, the program reduced the number of school arrests by 54 percent.

Kevin serves on various committees and boards in the field of juvenile justice. He testified before the President’s 21st Century Task Force, co‐chaired by Police Commissioner Charles Ramsey on the need for a concerted effort by law enforcement leaders to address the school‐to‐prison pipeline across the nation. He currently serves on the Pennsylvania Commission on Crime and Delinquency Disproportionate Minority Contact Subcommittee and is a former member of the National Academy of Sciences Committee on Law and Justice Committee. Kevin is also a member of the Youth Violence Collaborative and Youth Engagement for the National League of Cities Collaboration, the Philadelphia Juvenile Detention Alternative Initiative, a faculty member for the International Association of Chiefs of Police Juvenile Justice Leadership Institute, and a regular lecturer, on school diversion and racial and ethnic disparities at Georgetown University,
In addition to his formal education, Bethel has benefited from extensive specialized law enforcement training such as the Leadership and Specialized Training Course ‐ Class 208, as well as the FBI National Executive Institute Session XXXIV at the Federal Bureau of Investigation (FBI) National Academy in Quantico, VA.

Kevin has received numerous accolades and awards throughout his 29 years in the Police Department, which includes his selection as the recipient of the Philadelphia Daily News 2008 Fencl Award. The Fencl Award is bestowed upon a police officer that brings a unique blend of courage, integrity and determination to the job. Kevin holds a Master’s Degree in Public Safety from St. Joseph’s University and a Bachelor of Science Degree in Criminal Justice from Chestnut Hill College. He is also a member of the Chestnut Hill Libris Society, an honor given to graduates of the College who distinguish themselves in their personal and professional lives while exemplifying the College motto: Fides. Caritas. Scientia. ‐ Faith. Charity. Knowledge.