In almost every community in this country, youth of color are overrepresented in the juvenile justice system. Many jurisdictions have studied this problem, but far fewer have taken action to combat these disparities.

The Center’s staff have helped dozens of jurisdictions implement reforms that have a measurable and positive impact on youth of color. The resources below are designed to assist officials in their efforts to eliminate racial and ethnic disparities in the juvenile justice system.

The Center offers training and technical assistance to jurisdictions on a wide range of topics, including implicit bias, how to talk about race, enhancing diversion opportunities, and a range of other issues. To learn more about the Center’s training and technical assistance opportunities,  contact Tiana Davis, Policy Director for Equity and Justice, at 202-637-0377 x103 or tdavis@cclp.org. 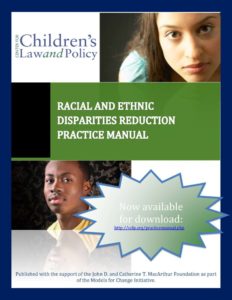 The Racial and Ethnic Disparities Reduction Practice Manual is a new web-based tool for public officials, agency administrators, community leaders, parents, and other advocates for children who are working to create more equitable and effective juvenile justice systems. The RED Practice Manual provides practitioners with concrete guidance and strategies, downloadable tools and resources, and examples of successful reform work in jurisdictions throughout the country. Visit the RED Practice Manual page by clicking this link. 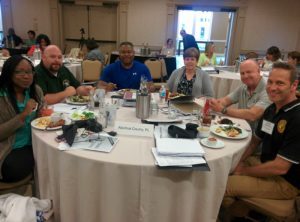 CCLP is collaborating with the Center for Juvenile Justice Reform at Georgetown University to offer an intensive week-long training designed to support local jurisdictions in their efforts to reduce racial and ethnic disparities in their juvenile justice system. Click here for more information on the program, including application instructions.

Other Publications and Resources

Fact Sheet: 2018 Changes to the JJDPA Regarding the Racial and Ethnic Disparities Core Protection
In February 2018, CCLP and the W. Haywood Burns Institute published a fact sheet on changes to requirements in federal law related to states’ requirements to tackle overrepresentation of youth of color.

Comments on Proposed Revisions to the JJDPA DMC Core Requirement Regulations
On September 29, 2016, the W. Haywood Burns Institute and the Center for Children’s Law and Policy submitted recommendations to the federal Office of Juvenile Justice and Delinquency Prevention aimed at strengthening the agency’s approach to reducing racial and ethnic disparities in the youth justice system. CCLP and BI prepared the joint recommendations in response to OJJDP’s call for public comment on proposed revisions to regulations for the Juvenile Justice and Delinquency Prevention Act (JJDPA).

Reducing Racial and Ethnic Disparities in Pennsylvania
Across the United States, youth of color are disproportionately represented at every stage of the juvenile justice system, with the greatest disparities at the deepest end of the system. Although every state is required to address racial and ethnic disparities as a condition of receiving federal juvenile justice funds, few places have gotten beyond studying the problem. In Pennsylvania, with support from the Models for Change initiative, several jurisdictions took the next steps and implemented effective, data-driven reforms to reduce disparities. These reforms included improved data gathering and analysis, increased cultural competence, implementation of objective screening instruments, development of alternatives to detention and out-of-home placement, improved probation practices, work with the faith-based community, and training and collaboration with law enforcement.

Partnering with Schools to Reduce Juvenile Justice Referrals
In Peoria, Illinois, a large number of African-American youth were entering detention for aggravated battery in one public high school. After learning more about the problem, local juvenile justice and school officials, with support from the Models for Change initiative, launched a pilot project to address fights and other incidents on campus using principles of Balanced and Restorative Justice (BARJ). Once implemented, the low-cost interventions resulted in a 35 percent reduction in school-based referrals to detention for all youth, and a 43 percent reduction for African-American youth. This pilot project served as a springboard for broader implementation of BARJ programming as an alternative to formal processing in schools and in the community.

Reforming Automatic Transfer Laws: A Success Story
In the mid-1980s, the Illinois Legislature took a tough stance on drug use among youth. As part of a national trend toward harsher punishments for juveniles, lawmakers decided to prosecute in adult court all 15- and 16-year-olds charged with drug offenses within 1,000 feet of a school or public housing development. Although the law applied to youth throughout the state, its effects were felt most harshly by children of color from Chicago. Armed with data gathered with support from the Models for Change initiative, advocates overcame criticism that proposed reforms were “soft on crime” and mounted a successful campaign to change the law. Within two years, automatic transfers in Cook County, which includes Chicago, fell by two-thirds—without compromising public safety.

Guidelines for State Courts Serving Limited English Proficient (LEP) Youth and Family Members
Good communication and cultural understanding are prerequisites to a fair, efficient, and effective justice system. Navigating the juvenile justice system is often difficult for youth and their families. For those from different linguistic backgrounds, understanding the process can be particularly challenging, and misunderstanding or confusion can contribute to their overrepresentation and harsher treatment in the system. In these two fact sheets, CCLP outlines the obligations of state courts that serve limited English proficient youth and family members, including the Justice Department’s new guidance from the fall of 2010.

Missed Opportunity: Waiver, Race, Data, and Policy Reform
In this article from the Louisiana Law Review, CCLP Executive Director Mark Soler examines the research on waiver of youth to adult court and racial disparities in the juvenile justice system. The article argues that the failure to gather and analyze waiver data by race and ethnicity to help guide policy reform is a missed opportunity, and it proposes new collection and analysis techniques that would enable jurisdictions to change waiver policies and practices to reduce racial and ethnic disparities.

Strategies for Serving Hispanic Youth
Former CCLP Deputy Director Dana Shoenberg co-authored this chapter in the latest edition of the Office of Juvenile Justice and Delinquency Prevention’s Disproportionate Minority Contact Technical Assistance Manual. The chapter, written with Maria F. Ramiu of the Youth Law Center, describes lessons learned from a two-year project in Washoe County, Nevada, and Travis County, Texas, that was designed to develop new and accurate data collection methods for Hispanic youth and to reduce DMC for Hispanic and other youth at key decision points.

Reducing Disproportionate Minority Contact: Preparation at the Local Level
The Office of Juvenile Justice and Delinquency Prevention released a bulletin on local DMC reduction strategies, co-authored by CCLP’s Mark Soler and Lisa Garry. It is the first in a series by OJJDP to address DMC. It provides valuable information on the context in which local preparation occurs, as well as specific strategies to successfully engage communities in DMC reduction efforts.

Guidelines for Collecting and Recording the Race and Ethnicity of Juveniles in Conjunction with Juvenile Delinquency Disposition Reporting to the Juvenile Court Judges’ Commission
This booklet provides instruction and guidance to local juvenile courts and probation departments on the accurate racial and ethnic coding of juveniles, particularly with respect to Hispanic and Latino youth (with Patricia Torbet & Hunter Hurst, Jr., National Center for Juvenile Justice).

No Turning Back: Promising Approaches to Reducing Racial and Ethnic Disparities in the Justice System
Building Blocks for Youth was a multi-strategy, multi-site initiative that featured an alliance of children and youth advocates, researchers, community organizers, and law enforcement professionals working to address racial and ethnic disparities. The initiative operated from 1998 to 2005. This is the final report issued by the Building Blocks for Youth initiative.