One in ten youth in juvenile facilities in this country report being sexually victimized by staff members or other youth during their stay. Lesbian, gay, and bisexual youth are particularly vulnerable, reporting victimization by other youth at seven times the rate of straight youth. Sexual misconduct in juvenile facilities has devastating consequences for youth, many of whom enter facilities with histories of trauma and abuse.

The Center’s staff have worked with many state agencies and juvenile facilities to implement the PREA standards and develop policies and practices focused on stopping the sexual victimization of youth in their care. To learn more about the Center’s training and technical assistance opportunities in this area, contact Jason Szanyi, Director of Institutional Reform, at 202-637-0377 x108 or jszanyi@cclp.org. 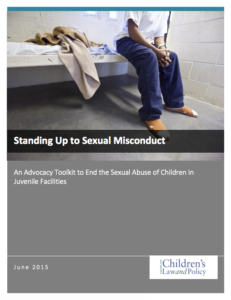 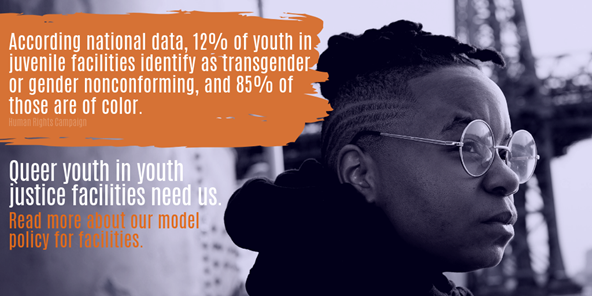 Model Policy Transgender, Gender Nonconforming, and Intersex Youth in Youth Confinement Facilities
In May 2019, the National Center for Lesbian Rights and the Center for Children’s Law and Policy released this model policy, with support from the National PREA Resource Center. The model policy provides a template for practices that promote the safety, dignity and well-being of transgender, gender nonconforming, and intersex (TGNCI) youth in youth justice facilities. The policy was developed with input from a diverse group of advocates, justice professionals and formerly incarcerated young people.

Standing Up to Sexual Misconduct: An Advocacy Toolkit to End the Sexual Abuse of Children in Juvenile Facilities
This toolkit is designed to equip advocates with knowledge and resources to secure important reforms that will make facilities safe from sexual victimization of children. The toolkit contains background information and messaging strategies around the need for reform and the requirements of the federal Prison Rape Elimination Act (PREA). It also provides concrete resources and advocacy strategies to achieve significant reforms in five critical areas of sexual misconduct prevention, detection, and response.

Fact Sheet: Understanding the BJS Report on Facility and Individual Correlates of Sexual Victimization in Juvenile Facilities
In June 2016, the Bureau of Justice Statistics (BJS) published a report entitled Facility-level and Individual-level Correlates of Sexual Victimization in Juvenile Facilities, 2012. The goal of the study was to identify trends to better understand the nature of sexual misconduct in juvenile facilities. Researchers examined the impact of facility characteristics and individual youth characteristics on victimization rates. Researchers then developed a statistical model to identify how those facility and individual factors interacted with each other. This fact sheet summarizes key findings from those three analyses.

Fact Sheet: Understanding the 2012 BJS Study of Sexual Victimization in Juvenile Facilities
In June 2013, the Bureau of Justice Statistics (BJS) published a special report entitled Sexual Victimization in Juvenile Facilities Reported by Youth, 2012. The report was the second of its kind published by BJS. It captured surveys of 8,707 youth in facilities owned or operated by a state juvenile correctional authority and adjudicated youth held under state contract in locally- or privately- operated juvenile facilities. This fact sheet outlines the study’s key findings and methodology.

Understanding the Impact of the Prison Rape Elimination Act (PREA) Standards on Facilities That House Youth
This quick reference guide provides a summary of the key requirements for youth in juvenile and adult facilities. It is intended for individuals who wish to understand the new standards but who do not have responsibility for implementing the details of the requirements.

PREA Checklist and Explanations
This document is designed to help agency officials and facility administrators understand the scope of the PREA standards for facilities that house youth by summarizing the key provisions and providing a checklist of requirements to help guide implementation efforts. Officials should read the PREA standards and commentary in full to understand the requirements that apply to their facilities.

Best Practices Above and Beyond the PREA Standards
The PREA standards represent a minimum floor for efforts to prevent, detect, and respond to sexual misconduct. Indeed, the Justice Department did not include a number of best practices within the standards themselves, choosing instead to leave them to agencies’ discretion. This document outlines best practices that agencies can adopt in addition to the PREA standards.

Comments from Youth Advocates on Minimum Staffing Ratios in Juvenile Facilities
In August 2012, the Center for Children’s Law and Policy, along with a number of other youth advocacy organizations, issued a response to the Department of Justice’s a call for public comments on proposed minimum staffing ratios for secure juvenile facilities as part of PREA. The comments support a minimum staffing ratio for secure juvenile facilities and recommended a number of modifications to the Department’s proposed standard.

Protecting Youth in the PREA National Standards
On April 4, 2011, the Center for Children’s Law and Policy, along with a number of other youth advocacy organizations, issued a response to a call for public comments on the Department of Justice’s proposed standards for the Prison Rape Elimination Act. The comments suggest a number of important improvements to protect youth and staff in secure facilities.